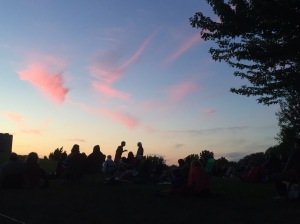 So I have avoided doing Shakespeare now for about 35 years.  This is not because of any dislike I have for the Bard but rather because of fear.   Pure Unadulerated Fear.  I will admit that I am not a fan of poetry.  I can appreciate listening to poetry but found it difficult to read.  A college acting teacher once asked if I was ever tested for dyslexia.  I never did find out but his question did sort of mirror ones that I had of my own but that is for another story.

If there was an audition for a Shakespeare play I just would not go.  Fear and a side career in drinking always  kept me from challenging myself in this particular area. Any area remotely difficult for that matter. If I was asked to do a classical piece I got by with a Mephistopheles monologue from Goerthe’s Faust. Go figure that rationalization. Mostly I would keep to roles that were in my wheelhouse as it were.  Finally memorizing lines took too much time away from drinking  period so I joined an Improv Group! That totally made sense to me at the time.  No regrets.   Yet another story for another time!

I am now auditioning for whatever comes up that I am right for and I have to say I am enjoying it much better than I did back in the drinking days.  This past summer I was given the oportunity to play Duncan/Old Man/Old Seyward in an outdoor production of Macbeth.  The director seemed to have much more conficence in me than I did in myself and I will be forever grateful for that. Grateful and TERRIFIED. I accepted.  You hear a lot about the gifts of sobriety.  Playing Shakespeare in a park 20 years sober is one of them!!  Knowing what the hell I was saying and doing (for the most part) is another.

This brings me to my current project Love’s Labour’s Lost..In Space!!  Yup in Space you read that right.  Same director with the same confidence in me but this time around I would have to audition. Fair enough but as I mentioned above I had never auditioned with a Shakespeare monologue before.  Even after doing Duncan I was terrified.  What I also was was prepared.  I did a tiny bit of Costard that I had down cold.  Auditioning with a Shakespeare monologue is officially off the bucket list! This time around I let fear push me through something rather than actually let it keep me from doing something.  The stuff you wish you could go back and tell your 25 year old self.  My 25 year old me would probably be too drunk to listen anyway!!

So I am playing Holofernes in Love’s Labour’s Lost..In Space.  I am also realizing Shakespeare is where the old dude parts are!  So maybe a class is in my future as well.  Being sober all these years has not made things any less terrifying.  It has however given me the ability to tackle a challenge and yes maybe even fail at it.  Just now for the time being I get to do it in Iambic Pentameter.